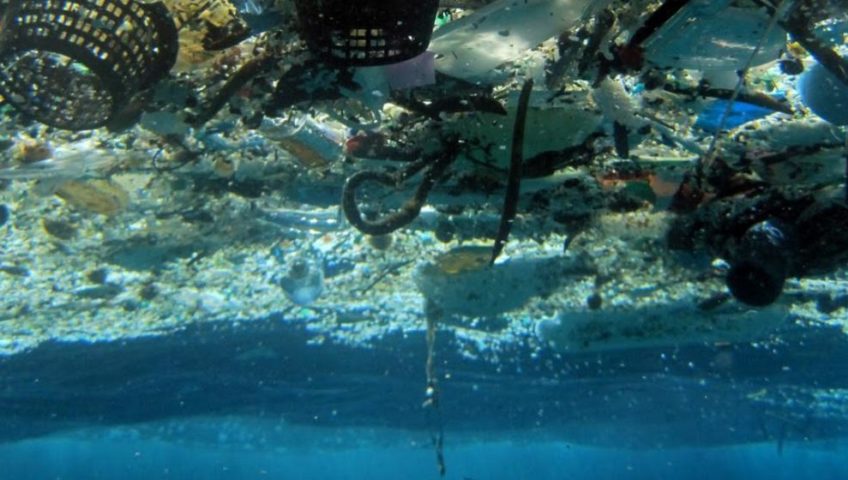 A Sea of Rubbish: The Great Pacific Garbage Patch

When we think about the sea, we like to picture clear blue waters, pristine beaches and an abundance of marine life swimming below the surface. Unfortunately no matter where we are in the world, it seems to be impossible to walk along the coast without spotting the odd bit of washed up debris. Plastic bottles are the usual culprit and staggeringly, 90% of the rubbish floating in the sea is made up of plastics.

If you take a trip to the cool North Pacific Ocean, you may just run into the most horrifying sight. Estimated to be two times the size of Texas (that’s about 695,621 km2), a huge mass of rubbish known as the Great Pacific Garbage Patch floats in between North America and Japan. Consisting of plastic-based debris, chemical waste and other rubbish, the colossal mass has been formed by the ocean’s currents pushing smaller garbage patches together and is now known to be the largest landfill on Earth.

Although the mass of the Great Pacific Garbage Patch is huge, it is difficult to detect via satellite due to the low densities of the debris. Nevertheless, this lack of visibility doesn’t mean its presence isn’t felt. That amount of rubbish is without a doubt damaging the ecosystems of marine life, the often harmful chemicals in the plastics polluting the water and being ingested by fish. This in turn can affect humans via the food chain as those fish are eaten by larger fish that are then caught and served up at restaurants and in our homes.

Large amounts of rubbish can also cause marine life to die prematurely as they swallow plastic and consequently get it stuck in their digestive systems. Many sea turtles have been victims of swallowing harmful plastics, as well as 1.5 million Laysan Albatrosses having plastic particles in their stomachs.  It’s estimated that the plastic content of the Great Pacific Garbage Patch has now harmed over 267 animal species worldwide. This is a problem as it not only affects the food sources of many marine animals but the overall ecosystem of the sea.

Plastic waste can also be damaging to coral and deep sea life on the ocean floor, and it is thought that almost 70% of plastic waste sinks to the sea bed. We like to think that most of the plastic in the world is being recycled but due to the laziness of some and the poor waste management of others, it’s now estimated that 10% of the world’s produced plastic each year ends up in the sea. That’s a lot of old bottles, containers and packaging, nearly 3 million tonnes in fact.

Several clean ups have been attempted since the Great Pacific Garbage Patch first appeared around twenty years ago. Unfortunately without the collective cooperation of every human on earth contributing less rubbish to our oceans, getting rid of the patch is nearly impossible. There are ways in which we can help reduce it though, most notably by adopting better waste management procedures, recycling responsibly as much as possible and remembering not to litter near the coasts. The Great Pacific Garbage Patch may be the largest mass of rubbish in the ocean but it’s not the only one. There is also a similar phenomenon in the Indian Ocean and the North Atlantic.

In order to prevent harm to hundreds of animals, our global ecosystem and the beauty of the world’s coasts and seas, taking action is vital. Hopefully with a little perseverance and greater awareness, humans can shift much of the debris and try not to add more to the mass. It would be a shame if the Pacific Ocean was one day just a sea of rubbish, ugly to look at and with no wildlife calling it home.